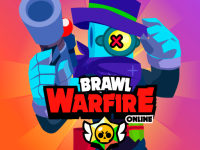 Have fun with this Brawl Warfire Online, a new exclusive game about struggle between heroes in the western hemisphere with a battalion of robots seeks to control the planet, but they will run into the heroes who will defend this conflict. An army of robots marches towards the nearby cities in order to wage a battle in which they will strive to rule the planet; the heroes of Brawl Stars set out to confront and defend the world from the robot ordes!!!