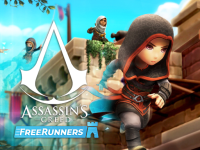 Through the eyes of AC Freerunners, relive the history and streets of the Assassin's creed universe. The iconic parkour system, which is part of the acclaimed game series, can be used to your advantage while competing against other players. For a totally different gaming experience, choose from classic or desync modes. To climb the highest point, you can jump from trampolines. End with a leap. This obstacle course is fun and exciting.

Each race is between a group consisting of eight players chosen randomly. The goal is to get to the finish line first, no matter what obstacles may be. The race is influenced by the four attributes that each character has, such as speed and acceleration. But, who wins is determined by the time players lose when climbing or getting stuck? Playing well may not be enough to win. This is why you should use your hard-earned money to unlock better characters and faster games. Because you can make a lot of money and still fall, the leap of faith at race's end is the best way to earn quick coins. Combine the amount of gold earned from levels and the money from advertisements to more than double your earnings. Alternativly, you can unlock certain skins only by watching commercials. This allows you to save gold for later.

How To Play Assassin's Creed Freerunners