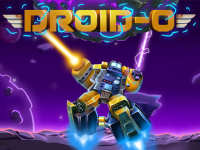 Fight in Droid O as a spaceship captain to defeat the invading foreigners. The aliens want to seize Earth and its natural resources. Earth's last chance against these aliens lies in you. You will be confronted with an increasing number of aliens in this space shooter. Drag your ship to move it left and right and kill the aliens. The aliens become stronger as you go on playing. You will need to upgrade the spaceship to combat them. You can also collect other powers, such as Shield, Rocket, and Cannon to make it faster and get more points. Take care as you only get three lives to fight against the aliens. Are you ready to take on all the alien invaders, and defend the earth? You can be the greatest spacecraft captain and defend the earth against the aliens.

How To Play Droid O