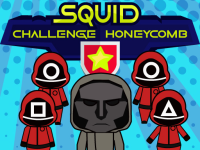 We have arrived to Squid Challenge Honeycom, one of the most well-known titles in the Squid Game series. This time you will be able to exhibit your skill to draw the extremely well-known forms using a little stick. In these survival games, this is your chance to prove to yourself that you are the best and earn all of the money. The ability to draw shapes as seen in the television series can be tested on this occasion; first, you must choose your favorite character and then attempt to complete each of the levels. There are a total of 10 levels in this game, the first four of which will test your ability to overcome and draw the fundamental shapes, followed by more difficult levels. It is not as simple as it appears, and if you make a single mistake, you will have to start over from the beginning and your character will be erased, forcing you to pick another character and so begin anew. Make the most of each opportunity to earn the greatest possible score and to improve in each try while having fun!